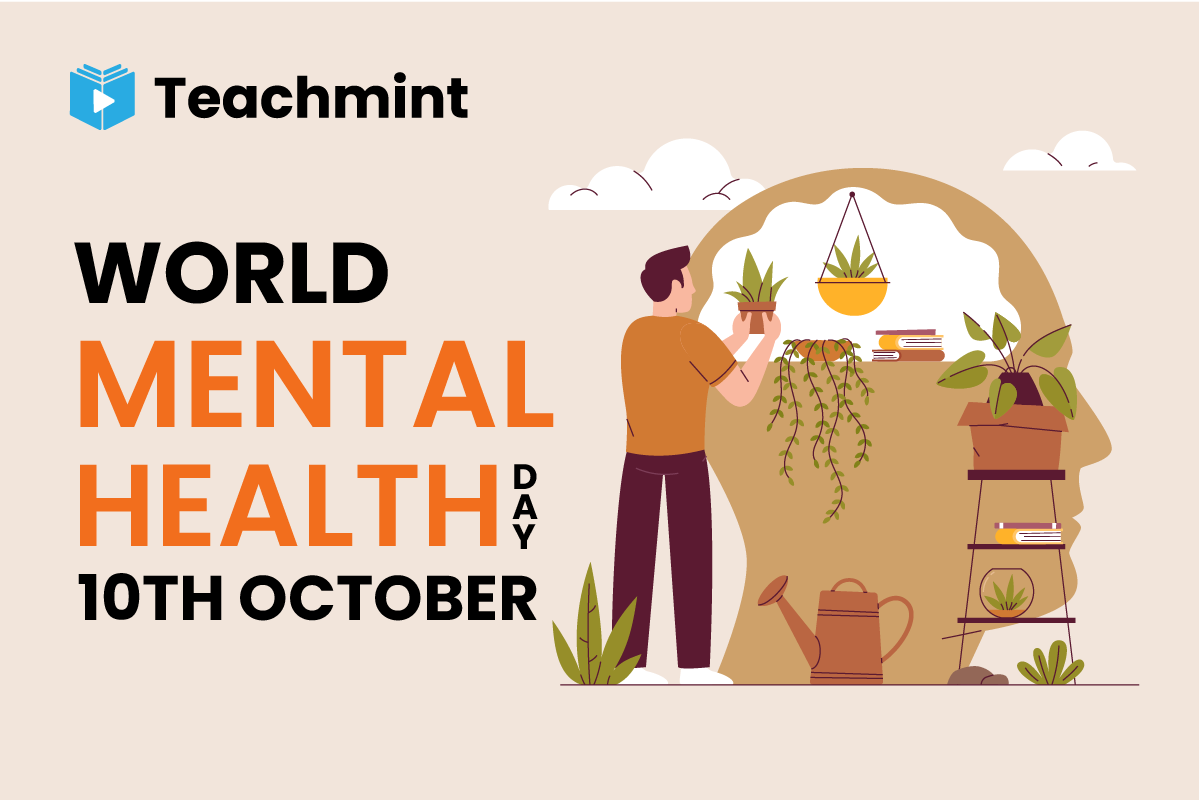 World Mental Health Day is commemorated every year on the 10th of October. It began being recognized in 1992 and has been an ongoing practice ever since. It initially began without any theme, but a couple of years later, it started being turned into a regular event because of the traction that it garnered. Mental health is part of a person’s everyday life and needs to be treated with as much care and diligence as one’s physical health. The youth is the hope for our future, and teachers play a very important role in the initial phases of their development. World Mental Health Day is a yearly reminder to check up on everyone’s personal mental health and be aware of others as well.

What is Mental Health?

As obvious as this question’s answer might seem, the more you try to verbally describe what mental health is, the vaguer the definition becomes. This is mainly because there is a myriad of things that are clubbed together under the banner of mental health. It is only when you understand what mental health is that you can tackle the problems that affect it.

The causes of mental health issues in an individual can be diverse as imaginable  trauma (physical or mental), bad childhood experiences, work stress, grief resulting from a loss, abusing psychedelic drugs, alcoholism, and even things that people consider trivial like comparisons over marks can cause mental health problems. This is why mental health problems can manifest in anyone who has the cognitive ability to think for themselves. However, when left unchecked over a prolonged period of time, the end result can spiral into something dangerous. All of it can be explained as coming from an extremely elaborate point of controlling your own life. If that sounds too long-winded, read on to understand the implications of it.

An act of suicide or self-harm comes from a deep-seated longing for a sense of control in one’s life. Human beings are extremely susceptible to a psychological tendency to gravitate toward negative information. This is known as the negativity bias and can have a serious impact on the way a person views the world around them as well as themselves. This is quite often exploited by the news and social media companies to sensationalize information which can further fan the flames of futility and helplessness within an individual. This is the same phenomenon that leads to a downward spiral of emotional and mental well-being. Their perception of themselves and the world around them will be colored by the skewed lens they will ultimately recognize as their reality. From that point onwards, their entire perception will incrementally become distorted to the point where they will start to see everything as hopeless and out of their own hands. They will start feeling as if things that are very much within their locus of control are so far away, which leads to emotional pain.

Contrary to what people may think, emotional pain, or rather psychological pain, is something that is not just something that can be “walked off” - it physically manifests itself in the synapses of your brain. Multiple studies have come to the conclusion that the amygdala, hippocampus, and dorsomedial thalamus (parts of the brain) are directly involved in the manifestation of major depressive disorder (MDD) in patients. The wiring in your brain can literally be adversely affected by a major depressive episode - so it is not something that should be treated lightly.

When everything seems out of control, people often come to the conclusion that all of this needs to end - the pain and this sense of having your entire life outside your control. This is what leads to self-harm, to control the source of the pain they feel, and suicide, as a means of bringing control to their perception of reality.

As important as it is to understand the source of mental health problems, it is also important to know how to help people who have not just a mental illness of some kind, but a collapsing sense of self-perception.

The first and most important step in helping people with mental health issues is understanding more about their mental state. The biggest hindrance to this is the resistance to keeping an open mind. In this digital age where information is free and accessible within seconds, the problem is not the lack of information but a willingness to actively seek it out. As we all know, too much information can lead to information overload which is, in itself, detrimental to one’s mental health. Using credible sources and learning about vital aspects of mental health in an organized manner is instrumental in decrying the social stigma surrounding mental health. This is one of the main reasons behind establishing World Mental Health Day - a reminder to all people that they need to look out for one another, that if it’s person A or B today, it maybe you tomorrow. So, it is important to keep your mind open to learning about it and understanding it so that you can help not only others but also yourself.

One of the most frequently used arguments against a person seeking help with their mental health is “It’s all in your head”. Of course, it’s all in a person’s head, that’s where it is supposed to be. The phenomenon of belittling a person’s pain/suffering to make them doubt their own reality is known as gaslighting, and it is fear of such gaslighting that leads people to not speak out about their issues. This is why every school should have its own counselor - to help students resolve their problems from a young age itself. It is important to understand that while mental health problems arise from the mind, they can manifest themselves in ways that can affect them physiologically, especially when it comes to their studies - so helping them at the earliest is instrumental in their mental and physical development.

The people who can identify the early signs of a mental health issue in a person are the people who are closest to them. These can be family, friends, relatives, or even roommates. Teachers also have a very big role to play in identifying the early signs of depression, anxiety, BPD, or any other prospective mental problems. Identification is the first step towards rectification, and so it is absolutely essential that people always look out for themselves as well as the people around them. Some of the general early warning signs of mental health problems are:

As mentioned before, the fundamental reason behind feeling like nothing makes sense is because of the existential dread of constantly feeling out of control. As a mental health advocate and author Mark Henick remarked in his TedX Talk, “Is suicide really a choice if it’s the only choice you have?” It is therefore important to help a person feeling that way to help them come out of the distorted reality they live in and guide them to a path where they feel valued and loved.

When Should You Seek Help for Mental Health?

This brings us to one of the most important questions related to mental health - When does a person get help? The answer is actually quite simple - right away. The sooner a depressive episode (or any mental health issue for that matter) is detected in a person, the sooner they should be able to come out of that feeling. It’s never too early and never too late - anytime is the perfect time to help someone with a mental health issue.

This World Mental Health Day, remind yourself to be patient with people. Remind yourself that everyone’s problems are uniquely their own, and there is no need to criticize or belittle their experience in an attempt to make them feel better - it does more harm than good. Understand that just like a major physical wound, a psychological wound needs time to heal. Give them the space they need to recuperate while also giving them the confidence to reach out to you when they feel alone

The report by the World Health Organization says that the suicide is a leading cause of death in 15-29 year old. That is an alarming statistic, and it puts the gravity of the mental health crisis that we have in our society in perspective. Almost all of the people that fall under this age bracket are students or young adults beginning their life, and that is where its significance comes into play. This World Mental Health Day, let us join hands and extend a helping hand to our peers and loved ones, and cherish the one life that we have to the fullest.

To learn more about the issue, visit WHO official website. You can also visit the Indian Medical Association's website to seek help.