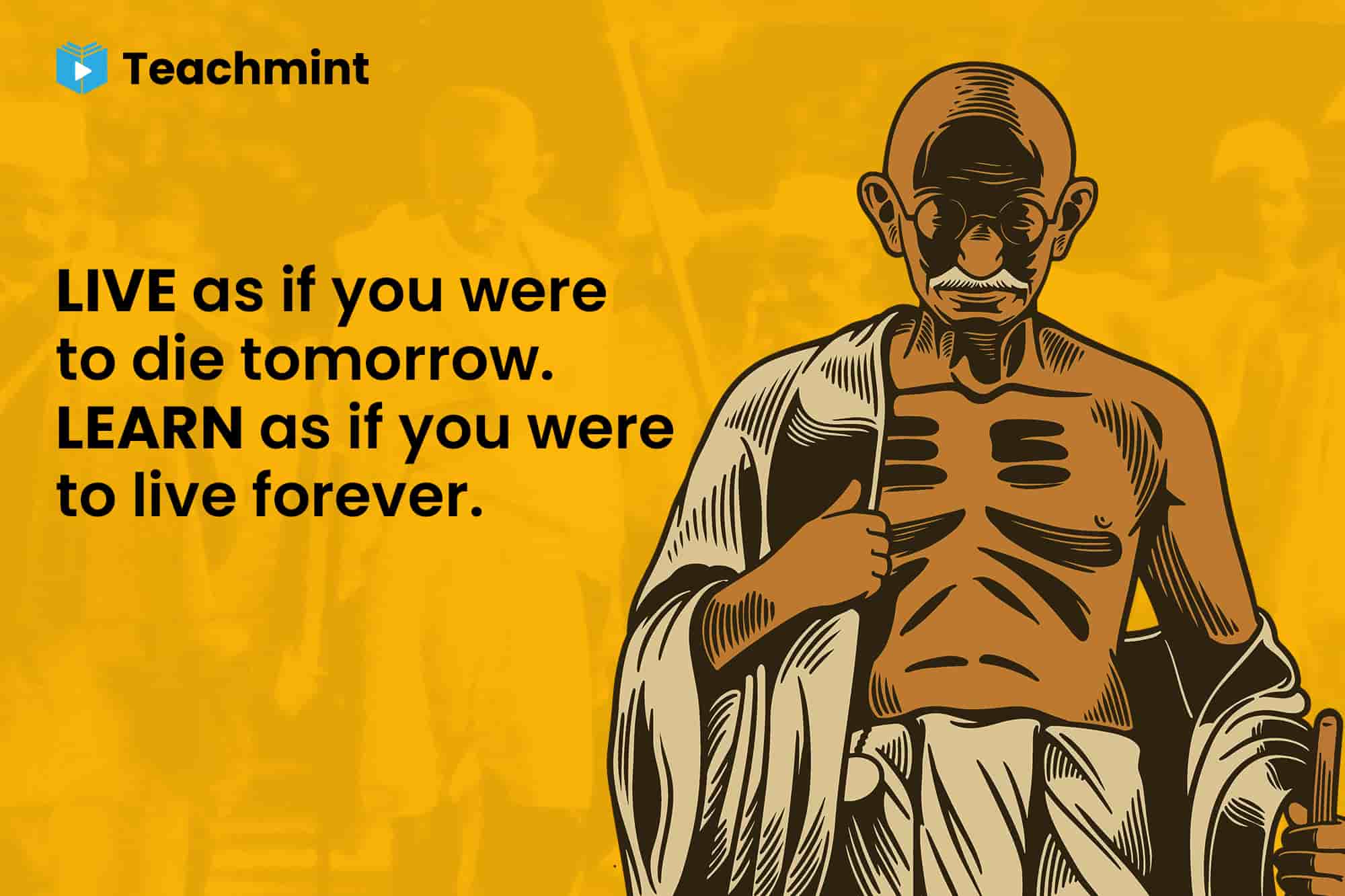 Mahatma Gandhi, the father of our nation was an exemplary leader, a compassionate human, a visionary, and an inspiration! Popularly known as Bapu, Gandhiji has set the true example of great leadership for the generations to come. Today, we will be looking at some Gandhi Jayanti Quotes to remember and honor this great man. These famous quotes of Gandhi stand as proof of how great he was. Without further ado, let’s take a look at Gandhi Jayanti Quotes.

2.The weak can never forgive. Forgiveness is the attribute of the strong.

Gandhiji was very forgiving in nature. This can be understood from many of his quotes and his life itself was an example of this. He did not carry the feeling of revenge or spite in his mind. You are not becoming the smaller person by forgiving someone who has done wrong to you, rather you are becoming the bigger person there.

3.The best way to find yourself is to lose yourself in the service of others.

4.In a gentle way, you can shake the world.

Such a meaningful saying and Gandhiji was a true example for this. He shook the world with his non violence and perseverance. The dhothi, the charka, the glasses, such a simple yet powerful man who showed the world that anything is possible if you have the will to work for it.

5.You must not lose faith in humanity. Humanity is an ocean; if a few drops of the ocean are dirty, the ocean does not become dirty.

This another one of the famous quotes by Gandhi, through this he says that one must never lose hope. As mentioned before, change begins from within and with the right tools such as education, wisdom, and likewise, we can be a better society.

6.Strength does not come from physical capacity. It comes from an indomitable will.

Perseverance is another important aspect that Gandhiji has talked about widely. It is the strong will and determination that helps a man accomplish great things in life. This is one of the most liked Gandhi Jayanti quotes.

7. Anger is the enemy of non-violence and pride is a monster that swallows it up.

Pride and anger are two-pronged swords that one must do away with. We know that Gandhiji was a strong advocate of ahimsa(non-violence) and anger and ahimsa cannot go together. Being mindful will help one to overcome anger.

8. Non-violence is the greatest force at the disposal of mankind. It is mightier than the mightiest weapon of destruction.

Mahatma Gandhi is considered as the founder of the modern nonviolence movement, and he spread this concept of ahimsa through his movements and writings and his life itself. He saw non-violence as the mightiest weapon of destruction and with all that is happening around us, one can only say that he was absolutely true. We should adopt non-violent methods as the mode of protest.

9. Power is of two kinds. One is obtained by the fear of punishment and the other by acts of love. Power based on love is a thousand times more effective and permanent then the one derived from fear of punishment.

This is such a meaningful quote by Gandhiji. He was a compassionate human being and believed that love and peace can conquer the world. He urges people to do things out of love and not out of fear.

10. We may stumble and fall but shall rise again; it should be enough if we did not run away from the battle.

This quote focuses on the importance of not giving up. No matter how many times you fall, all that matters is if you refused to get up or not.

We hope you liked these Gandhi Jayanti Quotes. Reading more into Gandhi’s life tells us how great he was. His teachings have made a huge impact on our society. The Gandhiji thoughts on English that we have compiled are truly inspiring and heartwarming. He led our country to freedom and gave us many principles to live by. October 2nd, Gandhi Jayanti, is also celebrated as the International Day of Non-Violence. This Gandhi Jayanti, let us take a bow to this great leader and practice ahimsa and peace.

To know more about his teachings and the lessons that we should learn from Gandhiji, read this blog.