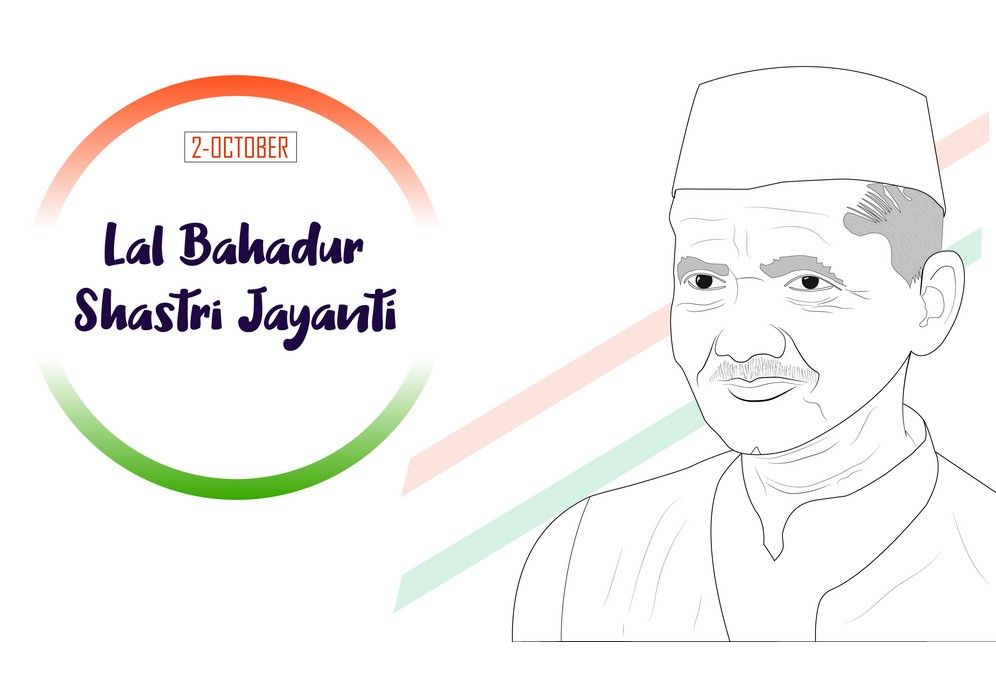 “We must fight for peace bravely as we fought in the war”-Lal Bahadur Shastri.

Who does not know Lal Bahadur Shastri? The second prime minister of independent India, a fierce freedom fighter, and a visionary-all these characteristics perfectly capture the essence of his personality. On 2nd October, India celebrates Lal Bahadur Shastri Jayanti to mark his birth anniversary. He was born on 2nd October 1904 in the Mughalsarai district of Uttar Pradesh. He always stood firm on his beliefs and wanted India to become self-sufficient in every field.

Lal Bahadur Shastri was born on 2nd October 1904 to Ramdulari Devi and Sharada Prasad Shrivastava. His father was a school teacher, and his mother was a homemaker. Therefore, he spent most of his early childhood at his maternal grandfather’s residence. He was a curious child and always wanted to learn new things. During childhood, he acquired virtues like boldness, patience, self-control, and selflessness. At the beginning of his school days, Shastri’s grandfather got him admitted into a primary school in Mirzapur. After completing his schooling, he secured admission to Kashi Vidyapeeth from where he completed his graduation.

During his graduation days, Lal Bahadur Shastri saw the disparity in society and decided to abolish the caste system; therefore, he dropped his surname. The title “Shastri,” meaning a scholar or a person with deep insights into holy scriptures, was given to him after the completion of his graduation at Kashi Vidyapeeth in 1925.

Lal Bahadur Shastri was an active freedom fighter with multiple revolutionary ideas. However, his interest in the political field grew after listening to the speeches and stories of national leaders. As a result, he decided to join the Indian Nationalist Movement. However, he was not very active during the initial phase of his political career. Shastri’s thoughts and actions changed after listening to a speech by Mahatma Gandhi in 1915. After that, he decided to actively participate in the freedom movement. When not involved in freedom movements, he spent most of his time reading authors like Marx, Russell, and Lenin.

Lal Bahadur Shastri’s first encounter with the revolutionaries happened in 1921 during the non-cooperation movement. He even got arrested for demonstrating defiance against the prohibitory orders. However, the authorities had to release him because he was a minor at that time. His interest in politics and freedom movements helped him become secretary of the local unit of the Congress party. Later, he paved his way upward and became the president of the Allahabad Congress Committee. Owing to his active participation in the freedom struggle, he was imprisoned by the British government in 1942. During his imprisonment, he spent most of his time reading about western philosophers and social reformers. In 1937, he was elected to be a part of the UP Legislative Assembly.

Before being selected as the Prime Minister of India, Lal Bahadur Shastri served in various positions. He gave multiple recommendations to the government which impressed Pandit Jawaharlal Nehru. Owing to his efforts in streamlining the state police department in Uttar Pradesh, Nehru invited Shastri to join the Union Cabinet and take the position of Minister of Railways. Shastri was a man of ethics and morality and believed in giving his best shot in whatever he did. In 1956, Shastri resigned from his post as the Railway Minister of India owing to a rail accident that killed 150 passengers near Ariyalur in Tamil Nadu. However, he returned to the Cabinet after a year as the Minister for Transport and Communications. Later, he was given the leadership of the Ministry of Commerce and Industry. In 1961, his role was changed, and he became the Minister for Home Affairs. During his tenure as the Home Minister of India, Shastri formed the “Committee on Prevention of Corruption” which was headed by K. Santhanam.

As the Prime Minister of India

After the demise of Jawaharlal Nehru, Lal Bahadur Shastri was elected as the Prime Minister of India. On 9th June 1964, he took the oath of Prime Minister. As soon as he took this prestigious charge, he was surrounded by multiple problems at the national level which had to be solved over a short time. He tackled many problems like unemployment, food shortage, and poverty. To permanently solve the issue of food shortage, he promoted the idea of the Green Revolution. Apart from promoting the Green Revolution, he also promoted White Revolution to enhance India’s milk production and supply. Shastri not only handled the issues of food shortage and unemployment, but he also proved his mettle during the Indo-Pak war. He granted liberty to security forces to retaliate. The war got over on 23rd September 1965, after that Shastri had to sign the Tashkent Declaration with his Pakistani counterpart Ayub Khan.

Reading the lesser known facts about a famous personality gives better insights into their personality. Some of the interesting facts about Lal Bahadur Shastri are mentioned below.

These facts make Lal Bahadur Shastri one of the most important leaders in the history of India. His willingness to work for the betterment of the country and the upliftment of people makes him a people person. Owing to his contribution to India's growth and development, we Indians celebrate Lal Bahadur Shastri Jayanti every year with great enthusiasm.

Schools can celebrate Lal Bahadur Shastri Jayanti in different ways. They can conduct entertaining activities to keep students involved and enhance their knowledge at the same time. Some of the activities that schools can organize are:

Schools can organize online and offline quiz competitions for students. They can frame questions based on the life events of Shastri Ji. To make the competition interesting, rewards can be associated with the game.

Students can participate in essay competitions to take a tinge of patriotism. While preparing the speech, they can look for credible information available on online and offline resources.

Teachers and students can work together to create an imbibing and visually appealing play on the event of Lal Bahadur Shastri Jayanti. They can take a specific incident or capture the whole life incidents of Shastri Ji in the drama. It will help other students understand his personality better.

Taking hints from the activities mentioned above, schools can organize Lal Bahadur Shastri Jayanti successfully. These activities will bind students and help them understand the life events of one of the greatest politicians in Indian history.