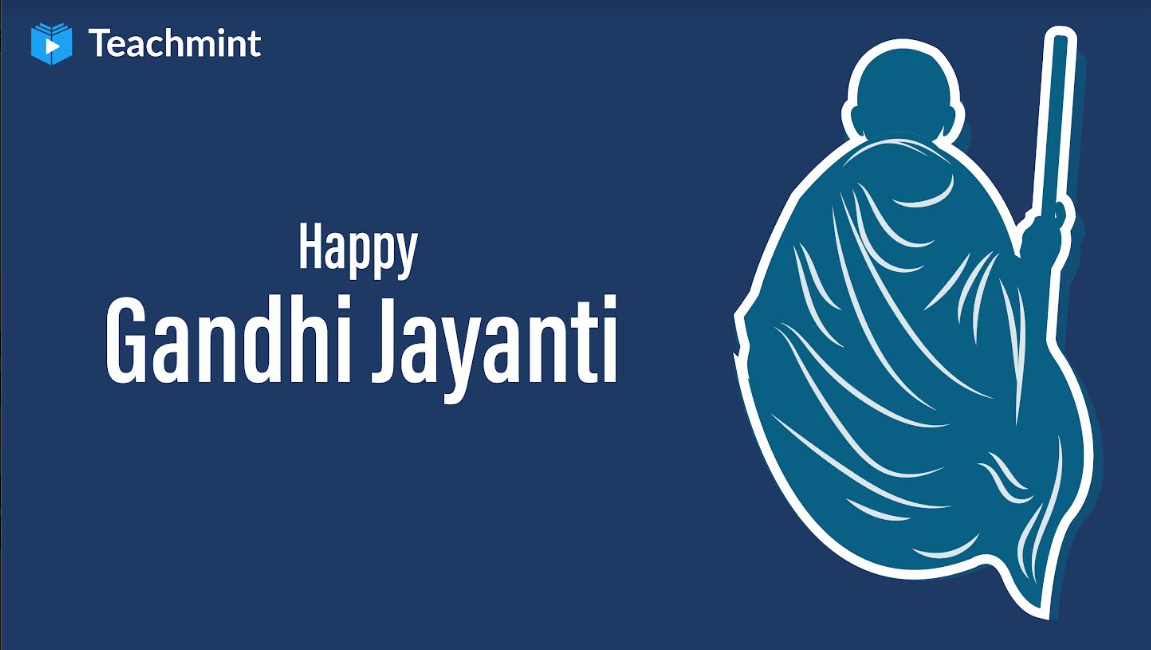 The one who shook the world with his principles of non-violence, Mohandas Karamchand Gandhi, popularly known as Mahatma Gandhi is a man who needs no introduction. Born on October 2nd, in Gujarat, Gandhiji was a leader of par excellence. He went on to become one of the most celebrated leaders because of his eloquence and visions. The lifestyle that he followed and the principles that he believed in are beyond commendable. This article will walk you through the best Gandhi Jayathi quotes to get inspired and get an insight into his core values and principles.

Mahatma Gandhi is the first person any Indian would think of when hearing the date October 2. Gandhiji is renowned for his nonviolent principles and contribution to the freedom struggle against British rule. He has also fought for the rights of marginalized groups in society. In 1944, Netaji Subhash Chandra Bose gave him the honorary title of "Father of the Nation."

Popular leaders like Martin Luther King Jr. and Nelson Mandela were inspired by him.

He was a man of his word, and his principles have a large following. Many campaigns for independence and civil rights were sparked by his accomplishments all across the world. His revolutionary ahimsa and swaraj teachings are popular around the world. Since Gandhi Jayanti is just around the corner, let us learn about the significance of Gandhi Jayanthi.

India commemorates Mahatma Gandhi's contributions to the liberation movement on October 2nd by observing Gandhi Jayanthi. He was the leader of numerous movements, including the civil disobedience movement, the Dandi Salt March, and the non-cooperation movement, which helped pave the road for an independent India. He also led initiatives to eradicate the marginalized castes' long-standing and pervasive discrimination in Indian society. He played a significant role in the development of modern India, and his accomplishments constitute a significant factor in where India is today. His contributions are ones that ought to be kept in mind forever.

India has a national holiday on 2 October Gandhi Jayanthi day. The UN General Assembly designated the International Day of Nonviolence on June 15, 2007. People of all ages continue to recall and respect his insightful lessons. On this day, People chant his favorite hymns and decorate Bapu with garlands as they pay him homage.

Gandhi Jayanthi is observed in educational institutions to enlighten students about the ideals of Mahatma Gandhi and his significant contributions to our country. Numerous contests and activities are held to provide students with a glimpse into these facets. Such events are held in schools to keep Gandhi's accomplishments fresh in students' minds.

Quotes of Mahatma Gandhi are popular across the world. The people who are inspired by him look for Happy Gandhi Jayanti quotes on the internet to keep themselves motivated. What better day than Gandhi Jayanthi to learn about his thoughts? Mahatma Gandhi quotes kindle our spirits with an urge to bring about positive changes in our lives.

Gandhi quotes can instill a sense of patriotism and conviction in the minds of students. Therefore, teachers can share Gandhi quotes in the classroom to introduce them to the principles of our father of the nation. Moreover, inspirational Gandhi quotes could make students understand the importance of being ambitious. These quotes can be an eye-opener for students or anyone for that matter. So, let us look at some famous Mahatma Gandhi quotes to get inspired. Here are some Gandhi Jayanthi quotes. Before that, Gandhi Jayanthi wishes to everyone.

1.“A man is but the product of his thoughts. What he thinks, he becomes.”

More often than not, people sulk in their own thoughts and lose themselves. This is a quote that highlights the power that our thoughts have on us. A simple yet powerful quote by Gandhiji that places emphasis on a very important aspect.

2.“Strength does not come from physical capacity. It comes from an indomitable will.”

In order to achieve anything in life, we ought to have the will to do the effort and face any challenges that come our way. This is one of the powerful Gandhi quotes that accentuates the power of will in anybody’s success.

3. “Glory lies in the attempt to reach one’s goal and not in reaching it.”

The greatest challenge of accomplishing any goal would be taking the first steps. This goal can be used while introducing inspirational Gandhi quotes, to make them understand, it is efforts that matter and not the outcomes.

Such a beautiful saying. Gandhi was a man of his word. He lived by his principles and teachings and that’s why this quote becomes so meaningful.

5. “If I have the belief that I can do it, I shall surely acquire the capacity to do it even if I may not have it at the beginning.”

Believing in self is the first step to success. The rest depends on the efforts that you put in and how passionate you are. Even if you don’t have what it takes in the beginning, you will reach there, eventually.

6. “An eye for an eye will end up making the whole world blind.”

As mentioned before, Gandhiji believed in forgiveness and that it was strong of someone to be able to forgive people. If all of us set forth on a journey to take revenge, that would just leave all of us scarred.

Gandhiji propagated and stood by ahimsa and he did not hurt anyone knowingly. Nothing that happens to you, no reason is good enough for swords and war.

8. “I will not let anyone walk through my mind with their dirty feet.”

We should not let anyone dull our sparkle. How others behave with you or what they say to you must not change your beliefs. Manipulation must not be entertained. You must be smart enough to avoid toxic people.

9. “Love is the strongest force the world possesses and yet it is the humblest imaginable”.

The power of love is beyond words. If more people practiced love as opposed to hate, the world will be a better place to live in.

10. “Whatever you do may seem insignificant to you, but it is most important that you do it.”

Tiny drops make the mighty ocean. Even if you feel that what you are doing is insignificant, always stand by it and keep doing what you do. Slowly, but surely, you will reach your goals.

11. “You can chain me, you can torture me, you can even destroy this body, but you will never imprison my mind.”

No matter what you do, you must never let someone else control your mind. Your mind should be strong and it is something that no one can imprison. Never take the wrong path.

12.“It is unwise to be too sure of one's own wisdom. It is healthy to be reminded that the strongest might weaken and the wisest might err.”

This is one of the poignant Gandhi Jayanthi quotes because it serves as a reminder that making errors is alright. We learn to be better through making mistakes.

13.“Always aim at complete harmony of thought and word and deed. Always aim at purifying your thoughts and everything will be well.”

If your thoughts are good, the words that come out of your mouth and your actions that do will be good too. Hence, you have to focus on improving your thoughts.

You must begin the change within yourself if you want to change the world.  This is one of the most-loved Gandhi quotes.

15.“A man should forget his anger before he lies down to sleep.”

Anger is a powerful weapon and one should put it behind at the end of the day. Piling up anger will just make things worse and end in non-violence.

The significance of continuous learning is discussed in this particular quotation. You may affect positive change by using your power of knowledge.

17. “If we could change ourselves, the tendencies in the world would also change. As a man changes his own nature, so does the attitude of the world change towards him. We need not wait to see what others do.”

As discussed above, if you are bringing about changes in your attitudes, consequently the world would also change. To be precise, changes begin with you.

According to this quote, being humane is more admirable than being human, which is what makes humanity so magnificent.

19. “Happiness is when what you think, what you say, and what you do are in harmony.”

When your thoughts and actions are in sync, it gives you ultimate happiness. Hence, make sure your words match your actions.

Action speaks louder than words. Therefore, make sure your actions are good enough to make some positive difference.