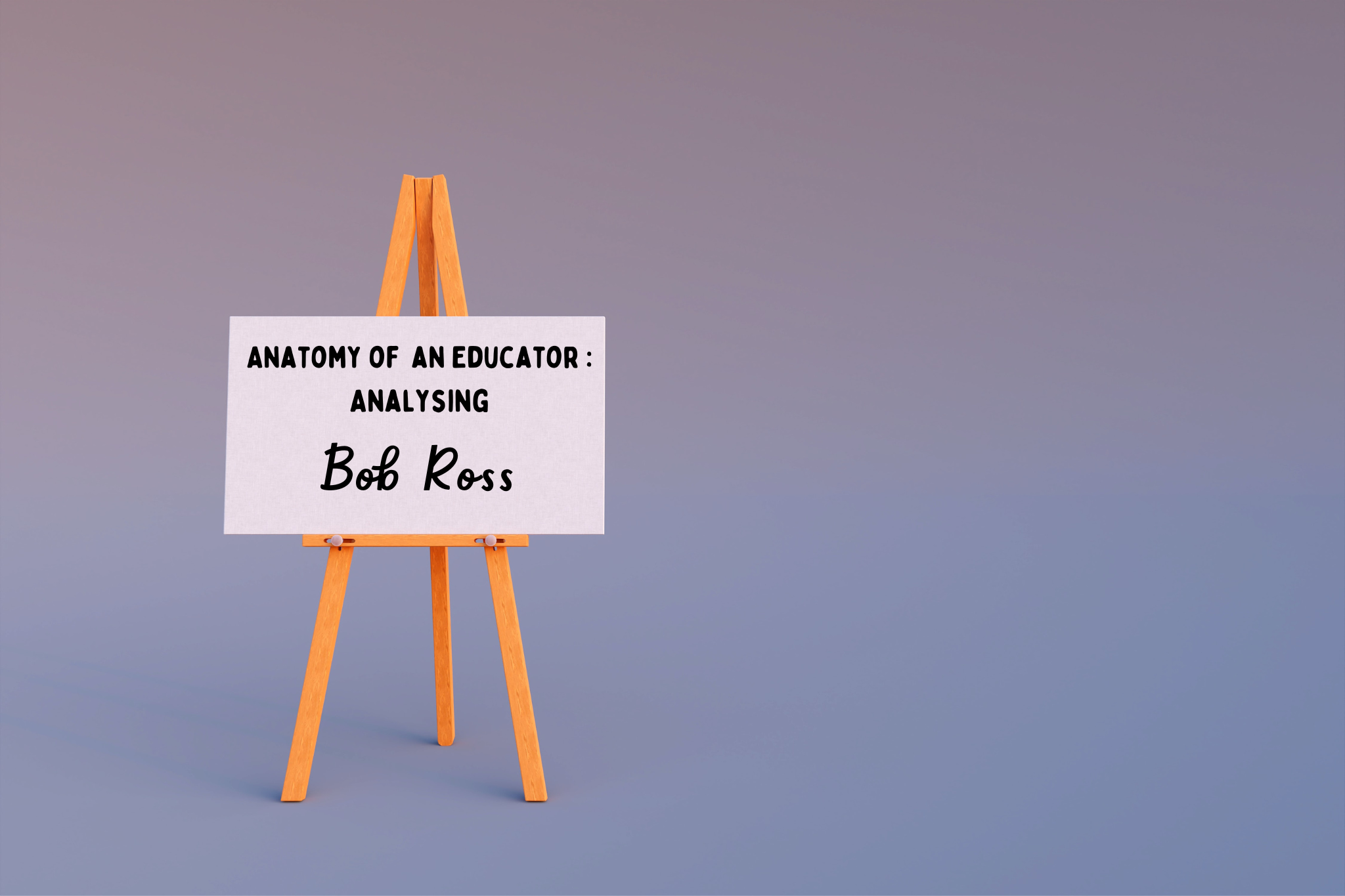 Teachers, just like students, have people they look up to, whether it is spiritual gurus, teachers they’ve had in the past, or people who have profoundly impacted the teacher’s psyche. There have been many educators over the years who could have a significant impact on a student’s perception of the subject that they study. Here, we will be talking about the impact Bob Ross has had on teachers and students alike and get into a deep empirical analysis of what can be deduced from his style of teaching. This can be quite helpful for a drawing teacher or art teacher regarding their mode of teaching and how it can help them shape their worldview about what it means to be a drawing teacher or art teacher in general.

Who was Bob Ross?

Before getting into the analysis of his teaching methodology, we need to first get into who Bob Ross was and what role his personal life played in his ascend into stardom as a drawing teacher or art teacher. Bob Ross was born to Jack and Ollie Ross, a carpenter and a waitress by profession respectively. As a child, he used to adopt and take care of animals ranging from squirrels to small birds to even, on one occasion, a baby alligator. He used to work with his father after he dropped out of school in the 9th grade, which is where he would have fostered an interest in the fine arts.

His Time in the Armed Forces

When he turned 18, he enlisted in the US Air Force. He was stationed in the Eielson Air Force Base in Alaska. It was during his time here that he fell in love with the picturesque landscape of Alaska and eventually found it in himself to reproduce it on paper, something that he would later come to be known for. However, he quickly ran into a problem. US Air Force personnel usually did not get much time for breaks, so he had to practice his passion for painting in the most efficient manner possible. He started using his own unconventional painting method which proved to be quite successful at getting him to complete a painting in under half an hour. This was extremely helpful and it led him to gold pan painting, something he came to be known for. His gold pan paintings eventually started getting him so much money that it exceeded his salary, so he soon quit his day job in the Air Force to pursue art full time.

His Time as a Student of Art

While working on his gold pan paintings, he came across a TV show called The Magic of Oil Painting, which was hosted by a German by the name of William Bill Alexander. He used to use a technique known as Alla Prima which later came to be known as the Wet-on-wet method.

The wet on wet method, as the name suggests, is using paints one layer on top of another without allowing the lower layers to dry. Bob Ross found this method especially useful because it made the art of painting much faster for him, which was what he was looking for. He also saw that this method allowed him to mix colors much better, which he saw as an advantage.

He found that this worked best for him and refined his painting method with the Alla Prima method to create what would later come to be known as the Bob Ross method. However, he wanted to know the complete details of this method and so he went out of his way to go study under William Bill Alexander. There, he trained under Bill Alexander, while also working as a salesperson for his art supply company part-time. After doing this for a while, he decided that he wanted to do this on his own, and impart what he knew to others as well in his own style. So he left Bill Alexander’s art supply company and started his own on the advice of an Annette Kowalski, who saw great potential in him.

Bob Ross initially didn’t have the idea of running an entire show on art on television, and even if he did, he did not start it off as such. He started the Joy of Painting series on the PBS channel on the 11th of January, 1983 as a means of marketing his art supply company, which at the time was just like any other art supply company. However, his series took off so well that he followed it up with utmost passion and enthusiasm.

All of his experiences would manifest themselves through his work as an art teacher, as will be evident in the rest of the article.

Now that you have a short insight into the life of Bob Ross, let's take a look at the meat of the matter - his teaching methodology.

The Use of Simple Language

Bob Ross always used very simple language in communicating with his audience. He never used big words to sound intellectual nor did he go out of his way to make the show technical in nature. His show, The Joy of Painting, was sort of like his personal journey through the art of painting and how he saw the world around him. The fact that he was a school dropout would also be a factor here as he would have thought that it would be unfair on people who have little to no education to feel left out of his lessons. This not only showed that he was humble but also considerate of his viewers.

The Joy of Painting was created in such a way that it was meant to feel personal for each and every viewer. He would go out of his way to make sure that this was the case. He would always speak in the first person to address himself and in the second person to address the audience. He made the videos feel like he was there in front of them teaching the art of painting - it would never feel like a TV show. He always had a smile on his face while teaching which gave a feeling of warmth to the entire show.

One of the main reasons why people would tune into the joy of painting was because of the way in which Bob Ross presented his classes. He was highly motivating in his classes and urged every learner to make tweaks and adjustments as they seemed fit. He would always stress the importance of imagination and make them feel at home inside their own mind - something that every art teacher and drawing teacher should aspire to be like.

Bob Ross used to tell stories while painting to act as a filler as he went about doing what he was doing. This method of teaching is extremely effective because it caters to our human conditioning of pattern recognition and associative learning. A story always acts as a hook to keep uninterested learners interested in the session, something that teachers always use when they sense that the students are becoming demotivated in the class. He would often use personal stories and experiences as segues in his sessions as well or to help the viewers visualize or remember the underlying message he was trying to put across.

ASMR stands for Autonomic Sensory Meridian Response, and it refers to the tingling sensation that certain people experience when they are exposed to certain types of auditory or visual stimuli. Some of the main ASMR sensation triggering stimuli include whispering, tapping, slow movements, pleasing landscapes, and so on. All of this left Bob Ross’s classes dead center in the ASMR space. He had a very soothing and calming voice, which felt very pleasing to the ear. The deliberate inclusion of accentuated sounds in his videos such as the dabbing of the paintbrush on the palette, washing the paint off the paintbrush, the gentle and rapid brushstrokes against smooth and rough surfaces, and the slow yet well-paced visual appeal of the way in which he paints a landscape all factor in to create a complete ASMR experience to the viewer. Another thing that stands out in ASMR is the comfort it offers in the form of repetition - which is where his iconic catchphrases come into play. Some of these are as listed below:

The Use of Readily Available Items

Bob Ross is quite famous all across the world, and his show The Joy of Painting is a perfect example of how if someone really wanted to pursue their passion, they could do so with the right amount of hard work, determination, and passion. He came from a lower-middle class family, served his country, found and followed his passion, reinvented and created an entire field of art, and ultimately ended up teaching the same in the most memorable way possible. It serves as a reminder that anyone can follow their passion and be fittingly acclaimed at it as well, as long as they had the drive for it. This is what today’s generation would call a ‘wholesome’ story.